skip to main | skip to sidebar

Instead of lab testing, do consumer testing - Just eat it and find out! 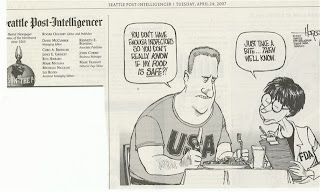 Since the food industry has discredited the value of testing, the alternative is to allow consumer sicknesses to provide test results.  HACCP's underlying "science-based" food inspection system allegedly maximizes public health benefits by deregulating the food industry, requiring a regulatory "Hands Off" attitude at the huge slaughter facilities, and allowing the industry to police itself.  Egads, have Americans lost their critical thinking abilities?
John Munsell
http://www.nader.org/index.php?/archives/158-USDA-vs-John-Munsell.html
Welcome to HACCP, the last big government "food safety" plan that wasn't:
http://www.organicconsumers.org/irrad/ctf.cfm
The beginnings of deregulation, and how feces became an approved part of the American diet...well worth reading!

From: The AGRIBUSINESS EXAMINER

"Carol Foreman, .... a newly minted Assistant Secretary of Agriculture, approved that year a change in food safety procedures that would have far reaching consequences. Foreman, one of only a few consumer advocates to reach so high a federal post, decided that poultry visibly smeared with fecal matter could be safely eaten after the feces was washed away.

"Any expert on bacteria could have told her then feces carry harmful bacteria which are invisible and which remain, clinging tightly to surfaces, despite repeated washing. Federal inspectors, until Foreman's ruling, would condemn the contaminated bird as unsafe or require the visible contaminated part to be cut away. The washing rule was a profitable boon to poultry processors who no longer faced the loss of unsafe product." ...

"Experts now agree that introducing in animal and poultry feed the same antibiotics used to treat humans can quickly lead to drug resistant bacteria. FDA found the sharpest rise in flouoquinolones resistance occurred after 1996 when the drug was authorized as a poultry feed additive."

"Foreman is a member of a politically prominent family in Arkansas. Her brother, Guy Tucker, served as governor until he was convicted of crimes not unlike those for which President Clinton was implicated but escaped indictment. "... Foreman would have been aware of Tyson Foods, an Arkansas company that processing more poultry than any other company in the U.S. and the world. Does Tyson use its political clout? Company officials at the highest management level have acknowledged improper and illegal activities in relation to USDA. Can washing of fecal matter be explained as a mistake in judgment when the decision would have benefited the largest employer in Arkansas? Perhaps, but it begs credibility to argue that it was made innocently unaware of its value to the poultry industry."

""Over the past six years, even while representing Monsanto and other corporate clients, Foreman has been one of the most vociferous supporters of Hazardous Analysis Critical Control Program (HACCP), an awkward acronym for a program to deregulate food safety. "The major reason for Foreman's renewed interest in food safety, however, is contained in her explanation for returning to CFA, i.e., she will seek to develop policies `that assure food safety in a global economy.' HACCP is the keystone of President Clinton's globalization strategy to restrict the ability of Congress and of citizens at risk of health to make food safety a political, or policy issue."


Al Krebs' his life was devoted to exposing Agribusiness.  He links HACCP - the last big "food safety" plan from the multinationals - to Monsanto, the WTO, Clinton, the poultry industry, and to a major reduction in inspections and increase in illnesses.
Time for those on the left, especially those in organizations which should know better, to learn the history and stop naively saying "but we have to do something about food safety."
Yes.  Get rid of the last thing the government and corporations did to UNDO food safety in the name of "food safety" - HACCP.
Once people understand who pushed HACCP, what it did to centralize the food supply into corporate hands, what it did to decrease food safety, the endless number of bills in Congress will be seen for what they are - a massive plan to take total control of the US food supply, promoting the old false promise of "food safety" and using  irrational fear to push things through.
Posted by yupfarming at 2:11 PM

Future of Food and Agriculture